I love EPP because it’s portable. I can sew at home on my sofa while watching tv or I can take it with me on holiday. I can sew on the train, in the garden and many other places.

However, I’ve now started a project that is EPP but most definitely isn’t portable. My Floral Star quilt started with a stack of fat quarters I was gifted by my lovely friend Paula. She knows how much I love anything designed by Kate Spain and I was thrilled to bits when she gave me her stack of Canyon fabrics. I knew I had to make something special with it and decided to try and supersize one of my designs. The choice fell on Floral Star and I couldn’t be happier so far.

The colours aren’t the same in my version so it looks quite different.

As you can see I’m not finished yet. I had to let Charlie sit on it as no one really understood just how big it is already. I don’t mind, though, as he is the cutest cat in the whole wide world. The smallest piece is about 3.5″ x 4.5″, most of them are over 7″. It’s quite a challenge but fun too. I had to use slightly thicker paper as normal 80g/m copy paper bent too easily with such large pieces. It makes the whole thing harder and heavier to handle so I can only work on it when I’m sitting on the floor or at a table.

Since taking this picture I have finished sewing on the magenta triangles and am now going to continue with some green, I think.

After every swap I participate in I say that I won’t do it again; but I always do. The last swap I joined was the Schnitzel & Boo mini quilt swap and you may remember the half circles I cut and started appliquéing. I can now reveal that I made this quilt, which I named ‘Over the Hills and Far Away’ for Amy. I met Amy at the Fat Quarterly Retreat 2012 and 2013 and it was just lovely to make something for someone I really, really like. 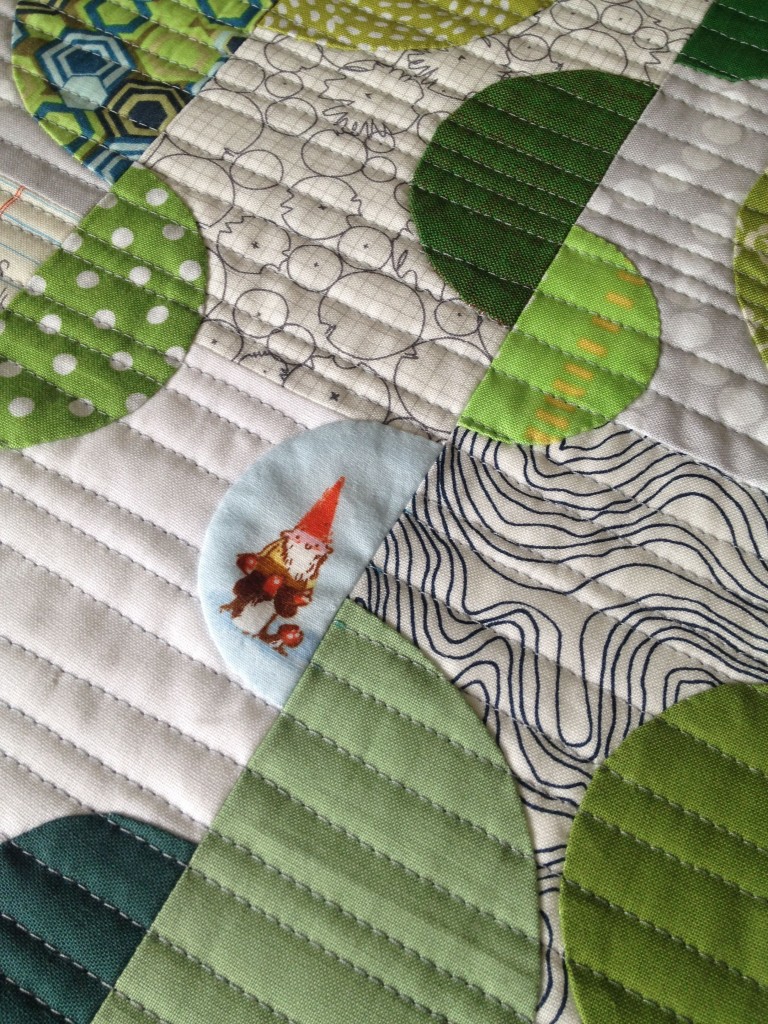 I sent her the mini with some extras but none of these were recorded here at Shark’s Dinner. That’s right, I was so excited about sending the package that I never took a photograph. Blogger of the year? Don’t think so… 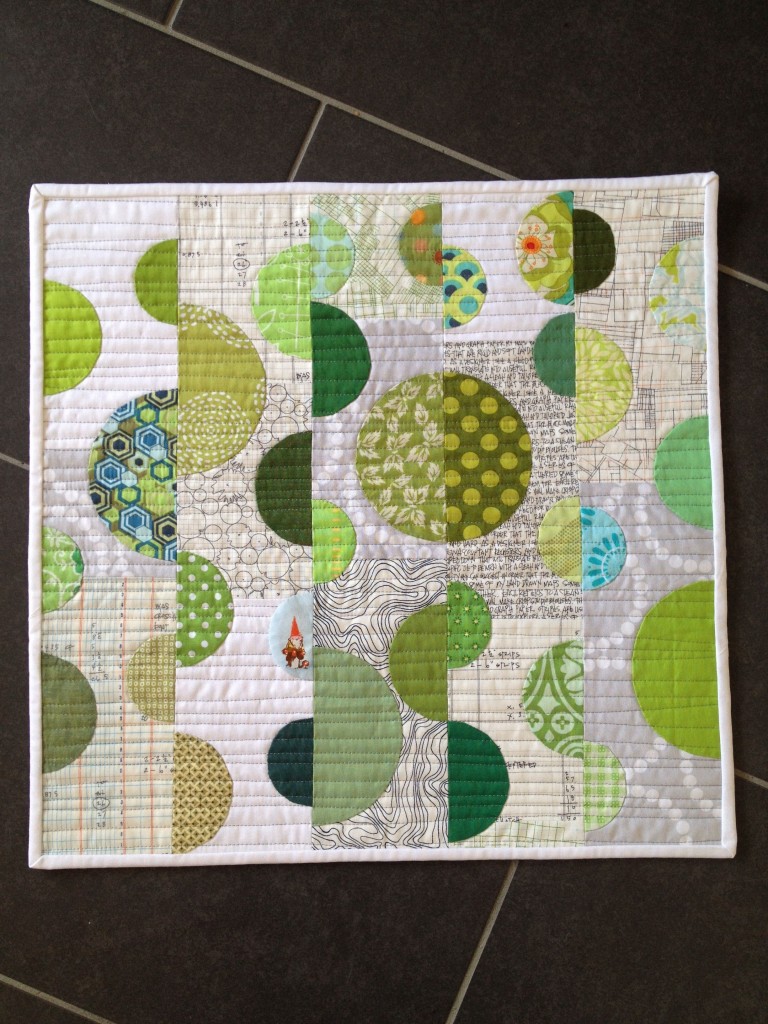 The design of this mini was something I cooked up for a big quilt. I was going to do the backgrounds in greens and yellows and do the half circles in light blue. The fabric pull has been sitting in my cupboard for two years now but the quilt still hasn’t been made.

Anyway, let me show you now what I received in this swap and you will understand why I keep joining these swaps again and again. This one is a stunner and I feel like the luckiest girl around. Alison is one talented lady! 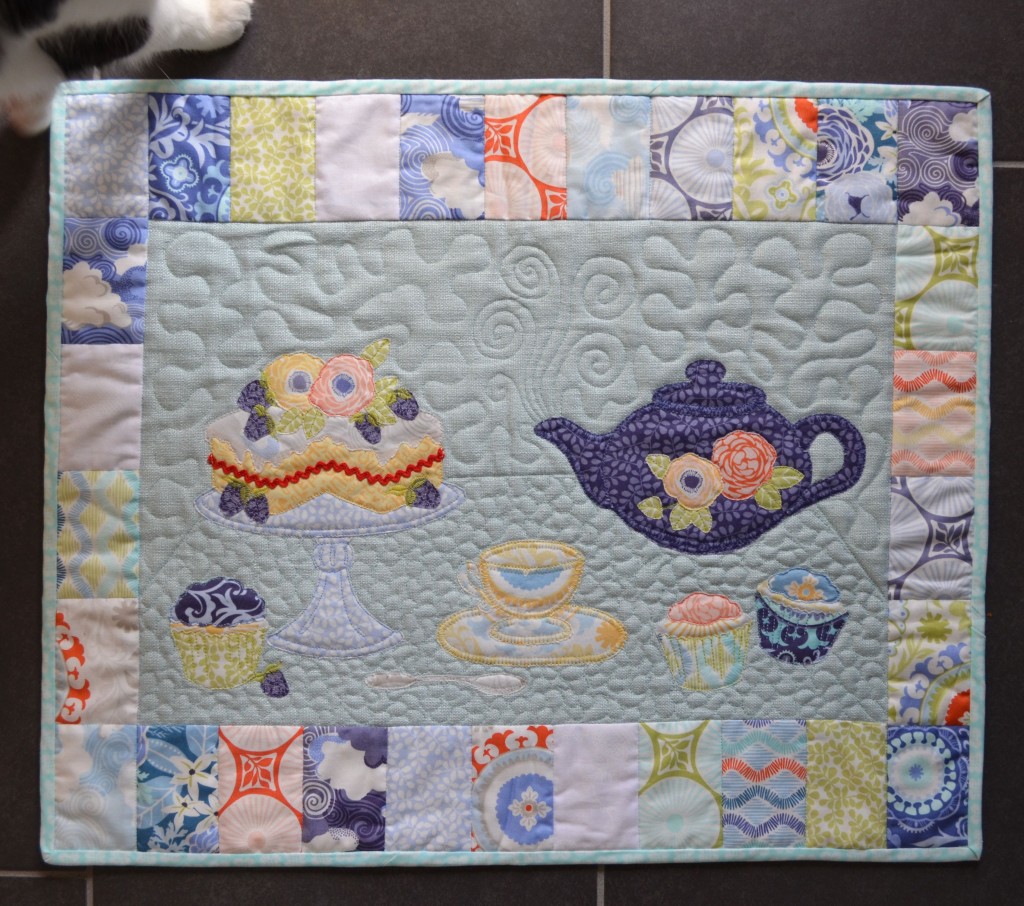 As always, the photo bomber had to have his say too. I love everything about this mini: the colours, the fabric, the beautiful execution. I mean just look at the details: 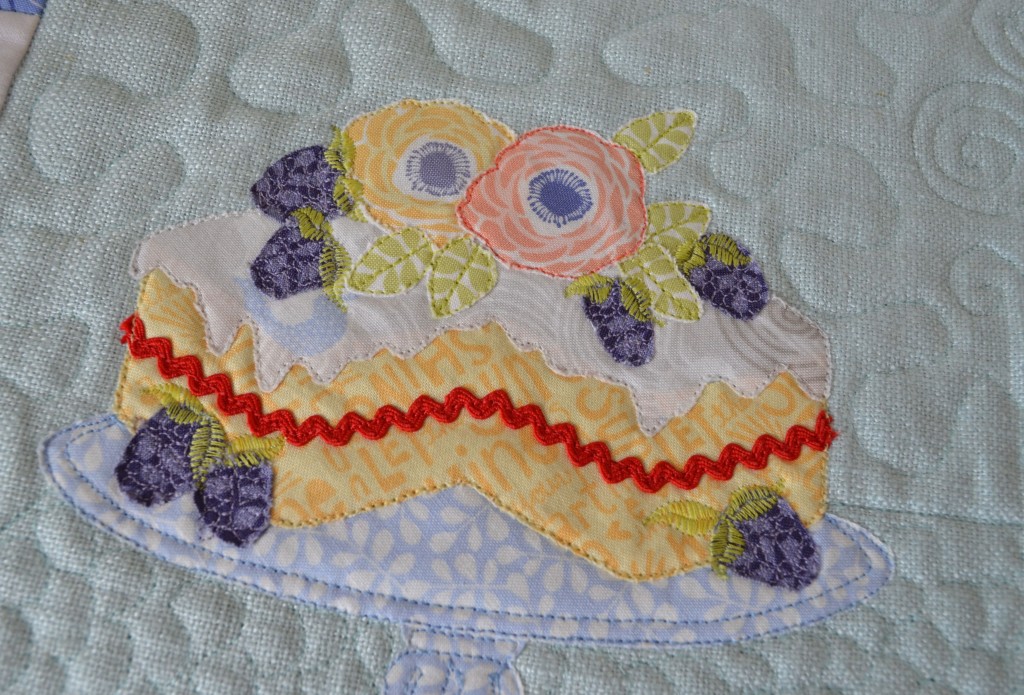 The cake looks good enough to eat, doesn’t it? And look at the blackberries. 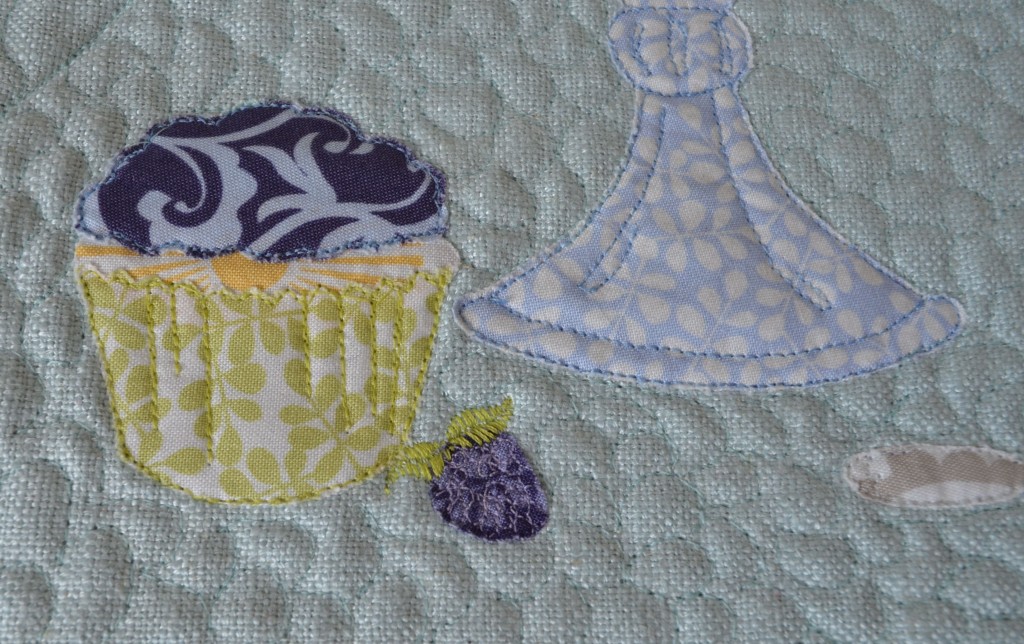 Tea, anyone? I’d love a tea pot like that. The FMQ is just incredible too. 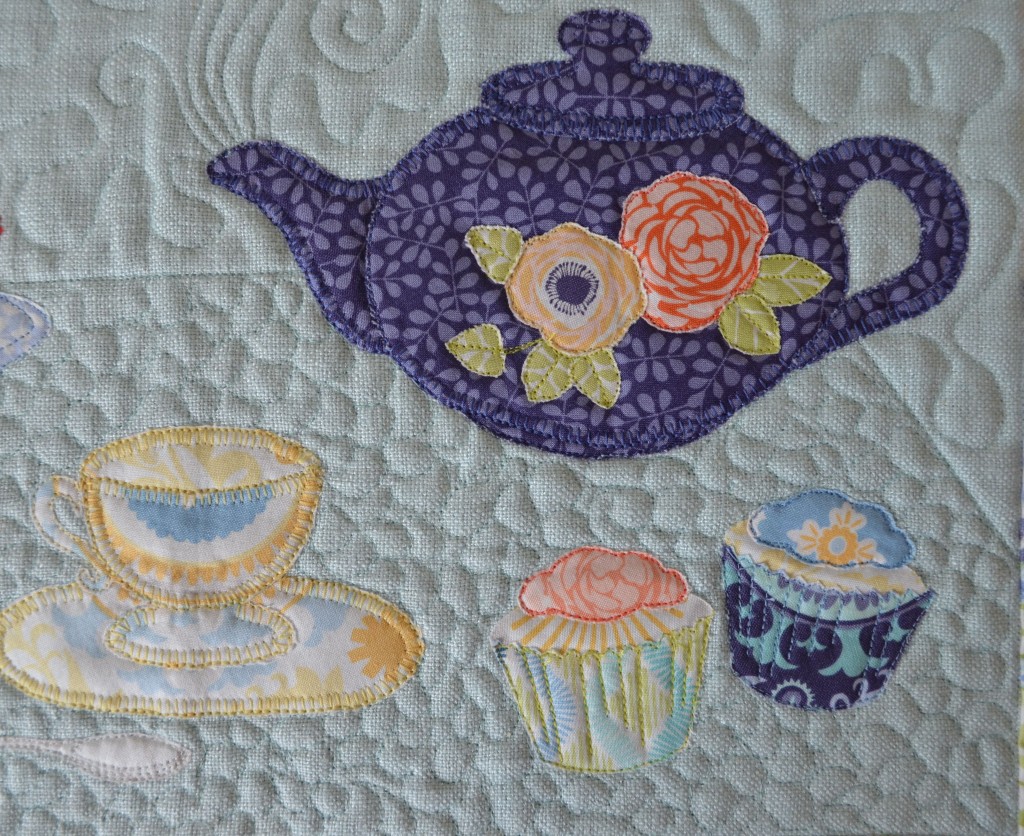 Little Miss Bossy-Boots tried to get me to hang it in her bedroom but I denied her the pleasure and have hung it in the sewing/craft room instead. I really would have loved to have it in the kitchen but I have no walls I can hang it on. So it’s joined the other minis on the wall and I love looking at it and being inspired by it. There were some extras too, a cute pink ribbon and some 3D stickers for card making but Little Miss Bossy-Boots got her little hands on those before I had a chance to take pictures (Hmm, I’m sensing a theme here). I definitely hit the jackpot here.

PS Oops, I’ve done it again. Sandy, aka Curly Boy, is organising a swap and I’ve signed up. If you’d like to join too, hop on over to his blog and fill out the form. You’ve got three days to do so!