This quilt has been in use for a while already, half quilted and unbound. I put it on the bed, just to see how it would look after I stitched in the ditch. There were still safety pins in it but that didn’t disturb Charlie in the least and he had his nap on it.

It stayed on the following day too and the day after that. Then I took it off and started quilting the pebbles. I can’t really call them circles as most of them are anything but round. Because they’re quite big I kept hitting my hand on the machine resulting in very wonky pebbles. Now, if this quilt had been for anyone else I would have ripped out all the stitches and done some straight line quilting but as it was always meant for me (it was made with the first fat quarter bundle I bought: Echo by Lotta Jansdotter) I thought it would be fun to continue and see if the quilting would improve. It did, a little. 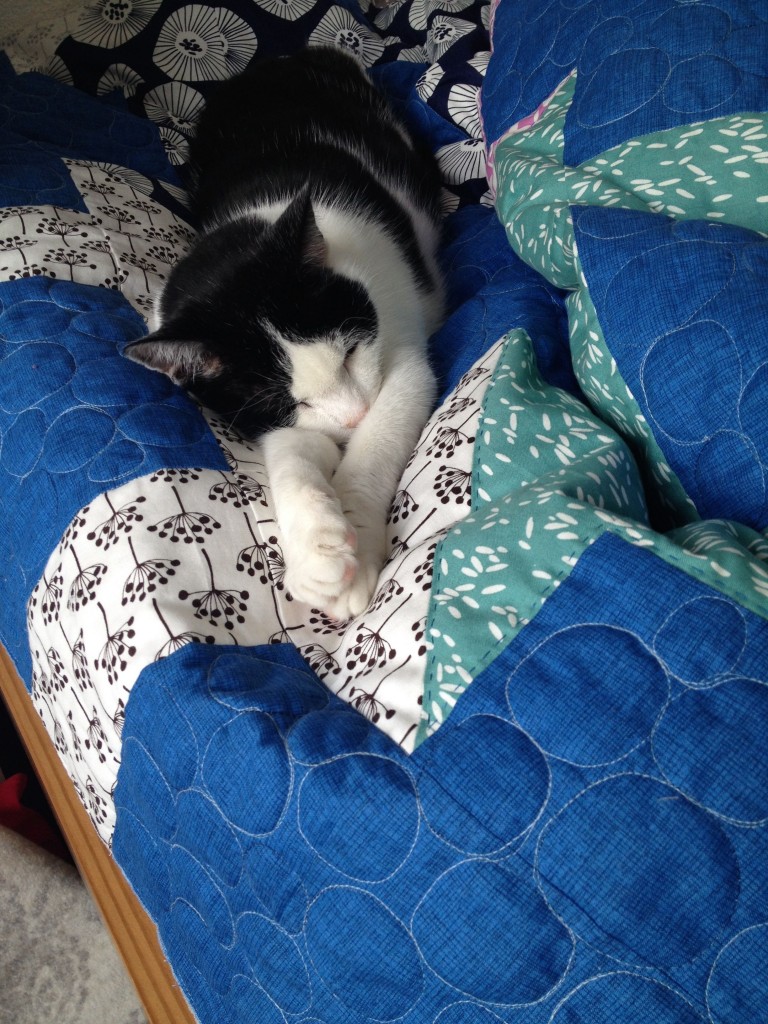 I started hand quilting the churn dashes but then didn’t really like the look and instead quilted them half an inch from the edge with my walking foot. As I was showing my mum the quilt I realised that I’d forgotten to sew around one of the insides. I may go back and do it one day but maybe not. It’s quite fun to have a quilt that isn’t perfect. Apart from the fabric and thread, that is. 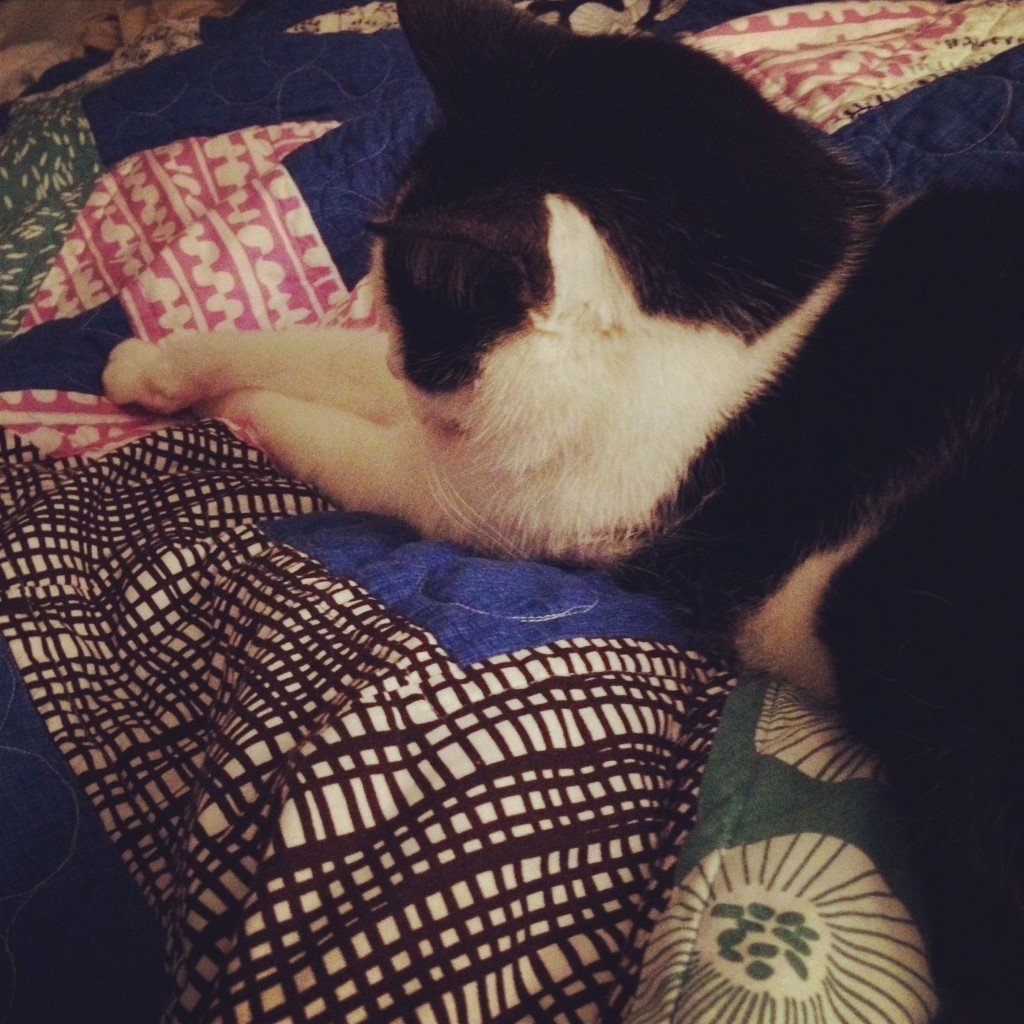 Charlie was on my case while I was quilting and when I was sitting in the evening hand sewing the binding to the back, which by the way is Pearl Bracelets. Wherever the quilt was, Charlie was. It now resides on my bed again and Charlie is happily sleeping on it! 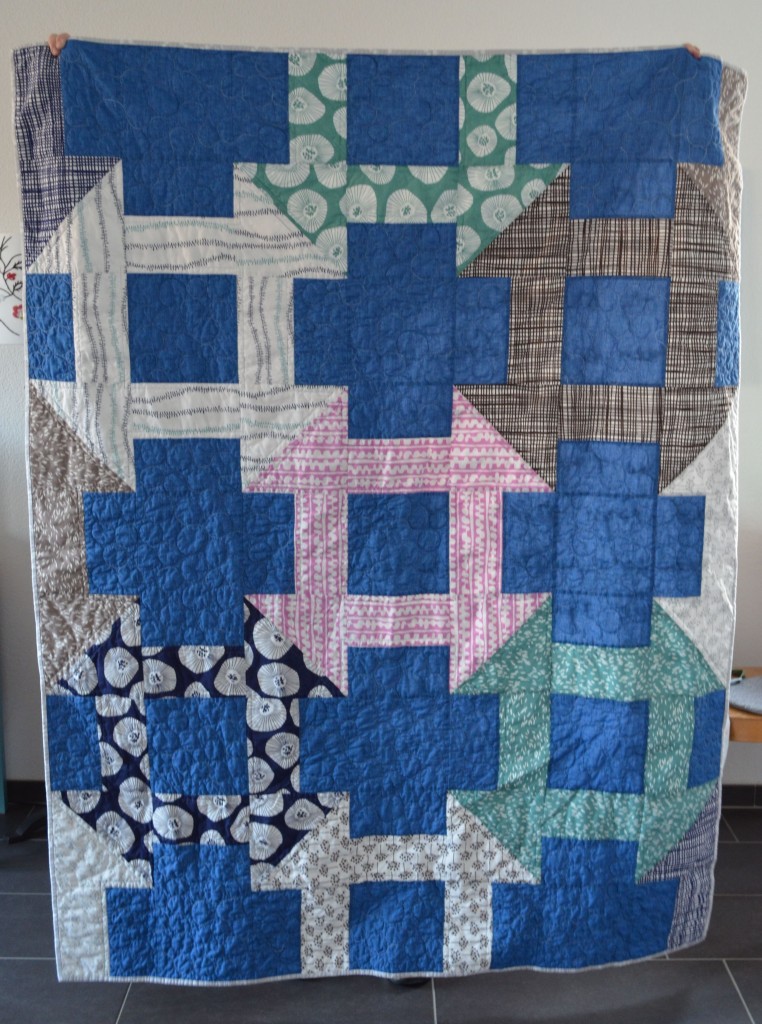 The quilt finished at 53″ x 68″ after washing and is perfect for snuggling and sleeping under. I pieced it with Aurifil  50wt (2600) and quilted it with a gorgeous variegated Aurifil 40wt (4669) in various shades of cream and blue.

This is another finish on my Finish-A-Long list, number four to be exact. I feel the need to take another picture of this quilt, maybe down by the lake, as this one was taken in the evening in lousy light.

Two years ago I fell in love with Lotta Jansdotter’s first collection, Echo. I bought a fat quarter bundle with nine different fat quarters in the blue, teal, brown and grey colour way. They were earmarked for a quilt and hoarded together with a pink fat quarter that I received in a swap. Last month both queen bees of the two bees I’m in asked for churn dash blocks. I hadn’t made any before but always liked the look of the humble churn dash. Making these blocks  was so much fun and it made me want to make more. I got my greens and yellows out but they were really all bought for a specific quilt and I just couldn’t get myself to cut into them. That’s when I remembered Echo. I wanted to see lots of the gorgeous fabrics so decided to design a big churn dash that would use up the whole fat quarter. In the process I also linked the churn dashes which again triggered a different design in my head (but more on that later). 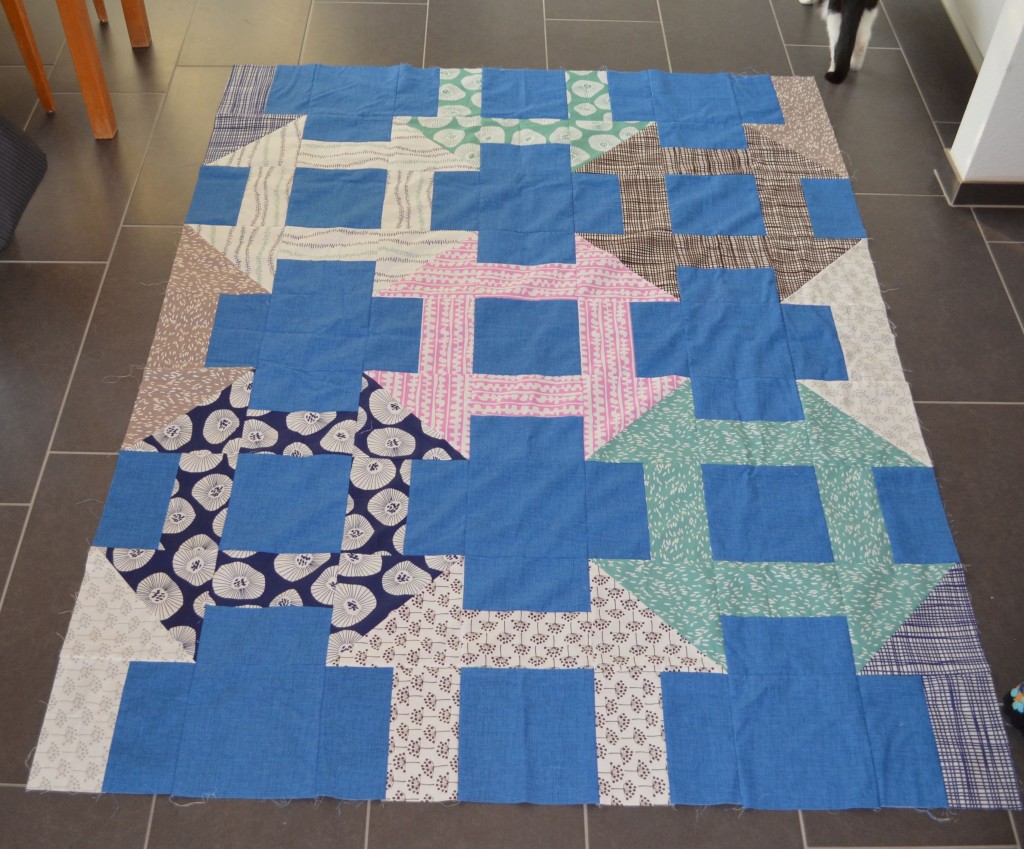 Yep, photo bombed again. Charlie does get around…

The blue sketch in denim was the only yardage in my stash that was big enough for this project. It was one of these situations where the sewing had to be done there and then. No way was I going to wait for fabric to arrive. I’m still not convinced by it but am hoping that I will like it better once it’s quilted, bound and lying on my bed. The quilt finishes at 56″ x 72″ and is my biggest so far. I’m hoping to do some free motion quilting on it but am a little worried because of its size. As I have to order wadding and piece the back before I can start basting and quilting anyway I’ll just put this in the wip (work in progress) pile and forget about it for a little while.

Next up: basting and quilting Little Miss Bossy-Boots log cabin quilt. If I’m really quick I might be able to finish before Q3 of the Finish-A-Long ends. Wish me luck!